115 Consumerist Veganism and “Voting with Your Dollar”

This week on VWPA we’re talking about the problems with consumerist veganism and the concept of “voting with your dollar.” 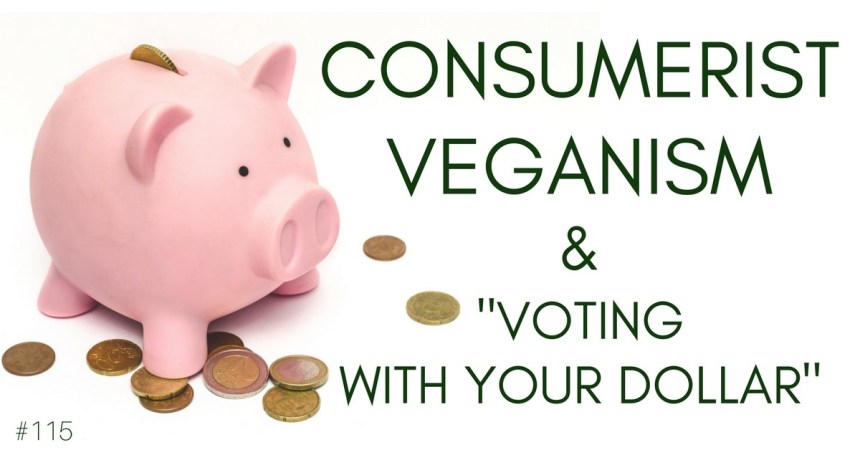 Nichole and Callie critically analyze the popular concept of consumerist veganism, whereby a vegan can be an activist through the purchases they make. Once consumerist vegans themselves, the princesses relate information they’ve learned along their SJW journey that led them to conclude that consumerist veganism is in many ways harmful and should not be touted as a definitive way to end animal exploitation.

Closing thoughts on “voting with your dollar” As we explained last week, blacks and latinx are systemically suppressed and prevented from voting or having their votes count in our elections. Our system of mass incarceration jails millions of people, many of them people of color. These people are not allowed to vote, for at least a stretch of time. They struggle to find employment, which means they struggle to find housing and, yes, food. As a man said in the documentary, The Best Democracy Money Can Buy, that we referenced last week, “First they take your job, then your house, then your vote.” By claiming that we can change the world by voting with our dollars, we take on what becomes a largely white savior idea of change, ignoring that so many have lost their literal right to vote AND are systemically economically oppressed so that they can’t “vote” monetarily either. This concept assumes a post-racial, post-classist world where people have control or access in these matters.

As long as there is capitalism, and therefore consumerism, there will always be products made by an oppressed group (clothing, chocolate, nails/massages, etc.) Boycotts are a great start, but they are not enough to plug the holes in the sinking ship that is capitalism.

Remember: we only started charging for food once we knew we had more than enough for everyone.

Joke in the middle

How do you stop a warthog from charging?

Mentioned in this Episode

This site uses Akismet to reduce spam. Learn how your comment data is processed.